skip to main | skip to sidebar

Have you met Ted?

There are only a couple of television shows that I will recommend.

Friends. Are You Afraid of the Dark. Gossip Girl. Rock of Love. Sex and the City. Lost.
But at the moment, How I Met Your Mother is the only show that I would really do anything for (but I won't do that). When NPH walks onto the screen I know I'm going to laugh. When I use a high five in a real life setting, I think of how proud Barney would be. When people say they are going to McCrackens in Marietta -- I think of McClarens. If I see Canada on a map, I think of Robin Scherbatsky. When I step into Lenox or Town Center I hum the tune of 'Let's Go to the Mall". I had Marshmellow and Lily Pad on my top friends when I had the myspace. Jason Segal is a sexy beast in my eyes.
All of this to say, I didn't publicly endorse a politician in 2008. But for 2009, I will campaign the crap of out this show. So do yourself a favor and watch The Great NPH on Saturday Night Live this Saturday, or I'll punch you in the face.
Posted by ashelywilson at 1:08 PM 6 comments:

I started my year off right. I slept until noon, I cleaned my room, I watched The Biggest Loser Marathon from beginning to end and I went to the gym.

An episode of Jeopardy was on. I suck real hard at Jeopardy. If it’s not covered by Perez Hilton, about stationery or referencing How I Met Your Mother then most likely I will not be able to answer the question. Like most gyms, there is no sound to the tv. So, you are either smart and brought headphones or you know how to read lips. Neither or those I did or was able to do.

The category was ‘Occupational Wear’. The question seemed to be right up my alley along the lines of useless information and celebrities. The question was, “Though Ashton Kutcher sported this hat, basically a mesh-back ball cap, it did not have a long haul of trendiness.”

The answer is fishing hat!

For the life of me, I could not think of the name of the hat! Edith, the 68-year-old who ended up walking away with $0 knew it. I didn’t bring headphones. I can’t read lips. I had no idea what the dang hat is called. Again, Edith knew it.

Last night while Kris was talking about losing Finn in a Panama City Wal-Mart, I looked over and saw Jay Wilson. And thank God I saw Jay Wilson. He was wearing that hat. A glorious blue hat.

So thank you Jay Wilson.

Jay Wilson, thank you for wearing that blue trucker hat last night. I was able to rest my head last night knowing that I knew what trendy occupational hat that Ashton Kutcher sported.
Posted by ashelywilson at 4:09 PM No comments:

I live in downtown Atlanta. Grant Park to be more specific.

When you move into the city like Atlanta, you pay high rent for many things. Like tasty restaurants, dive bars, trendy boutiques, open minded individuals, beautiful parks, independent coffee shops, a stellar music scene and theft and robbery like you wouldn’t believe. Before I even moved downtown my car was broken into twice. In Grant Park alone -- I am aware of one lonely lawn mower stolen from my front yard, 3 cars stolen for mostly parts (but later found), at least 4 or 5 cars being broken into and a very cute scooter taken by children. One friend told me about her sprint down Euclid to catch a bike thief and in East Atlanta a friend was punched in the face when he saw a car being stolen outside of his own house.

I’ve come to terms that once I step outside my door to go to work or brunch or the like, I would experience two different feelings of invasion of privacy. Either my car being stolen or even broken into. I am prepared for this. I might think to myself, ‘Shit, it happened to me’ and then I would proceed to call the cops. It sucks even more these days if it happens since I just bought a new car and I am now proud of this said car.

This morning, I walked outside. Car was there.

The windows were all windowed.

As I used my fancy keyless entry I realized that I’ve been pooped on. The birds of Grant Park attacked my car with poop. POOP! If I was driving the good ol’ falling-apart-no-door-handle-Corolla, I would of shrugged off and went on with my day.

Today, I was pissed! My beautiful still smells like new car was pooped on! So, as the FedEx man was dropping off a package to my neighbor I’ve never met, I was using ArmorAll: Car Wipes to wipe off each and every shat. There were at least 6 or 7 spots. In one night. Some were that gross white runny poo and a couple were brownish that looked like chewing tobacco.

So today, January 2nd, was the first time my new car felt violated. With being in the city, I am sure this is the first of many violations. I just didn’t think it would involve me cleaning bird poo in the rain.
Posted by ashelywilson at 2:36 PM 1 comment:

I blog. I use Twitter. I had a LiveJournal, a Xanga and a MySpace. I've plurked. I live on
facebook. I would feel disconnected if I dropped my iPhone in the toilet. I work
for a dotcom company. Google street view. Gmail. Google anything.

I love a hand written letter. Postage prices go up more than gas prices. No one
reads the newspaper so my dad got canned from The AJC after 19 years. I got canned
from a stationery store due to email and evites. Polaroid’s are archaic. You
can’t have a conversation with someone without facebook or YouTube coming up. I get bitched out over emails and blogs.

All I know is this.

We need technology to survive these days. I can’t spell worth shit. I need
an application called CheckPlease to compute percentages at restaurants. If the
internet goes down at work, I go down. I’ve converted tapes to CDs and then CDs
to iTunes and what’s next?

Only if technology could cure cancer, erase our nation’s debt and feed the poor I will take back all the things I hate about technology.

Posted by ashelywilson at 1:10 PM No comments:

Yesterday, after 8 hours of my left eye being blurry and everything not really feeling right, I decided to investigate what the crap was going on. I thought it was weird anyway since they were brand new contacts. When I took my contact out, I realized I got two for the price of one. I had 2 contacts in my left eye. TWO CONTACTS.

The manufacturing guys probably justified the two contacts since the contact package before contained a dried and shriveled up contact from an apparent leak in the top.

It’s a Thursday, but it feels like a Friday. The holidays make everything slow(er). Slow drivers. Slow days ticking by. Sloooooow. The only thing that is slow is the amount of gray hair that I am getting. It’s ridiculous.

The past couple of weeks have been crazy. A lot of big things have happened.

That was a scary and long day. Nothing slow about that day. A blog was passed around confirming that CB was doing major layoffs. There is nothing like hearing about a layoff and contemplating if you are really needed. I didn’t want 2008 being the year that I was layed off two times. But shit happens.

Luckily, I was fortunate enough not to be one of ones who got a box full of their stuff on
a Friday afternoon. Luckily, I am still employed.

This is a pretty big deal. My car was janky. Now I am a proud owner a 2008 Nissan Sentra.

How it was janky you ask? 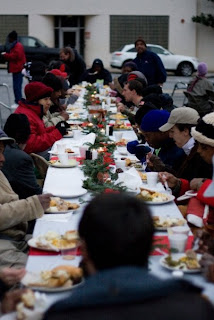 David Gordon and myself are partners in crime when it comes to leading the food section for Lazarus events. He plans it and I email. It sounds easy, but when you
are car looking, over loaded at work and only have email access by phone whilst not at work it can be daunting. I’m not complaining, I’m just saying. Thanks to a success to a ‘Socket Drive’ that co-workers and I hosted at CareerBuilder, we were able to donate around1,500 socks and 100 blankets to the Homeless of Atlanta. FTW! 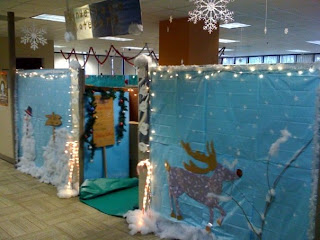 To boost office morale, we are in the midst of spirit week. Pajama day Monday.
Team/cube decoration on Wednesday. Movie day on Friday and much more. We didn’t win the decoration contest because we didn’t have a pregnant chick dressed as a penguin, but we did have the most original idea. As you can see.

Poker (I hardly know her!)

So I was leaving The Local last night at a reasonable time and I heard my name.
I turned and it was my friends Vince and Geoff from my Rounder days. I’ve been
itching to play cards again, I feel as the Lord has been telling me to start
playing again. I talked to Pat Tate about it on Tuesday. Saw Vince and Geoff on
Wednesday. Maybe not the Lord, just coincidence. But I would like to say the
Lord, because I always feel highly favored when I take everyone’s cash money
(records).

This will be a sad day. This will be my first cube move in the 7 months that I’ve been at CareerBuilder. With new sales alignments and the massive layoff, we are moving cubes and teams. I will part ways with a lot of my team members who I now call friends.
I know this has been a long one. But it’s been a long time since I posted last. Mike Dunn said he would read it at least, my fellow office job friend. I have two New Year’s Resolutions:

Posted by ashelywilson at 2:44 PM 2 comments:

I mean, they make relationship drama look so easy and very appealing. I will take some drama if it means I end up with Seth Cohen at the end of the day.

If you know what I mean.
Posted by ashelywilson at 3:40 PM No comments:

That's what she said